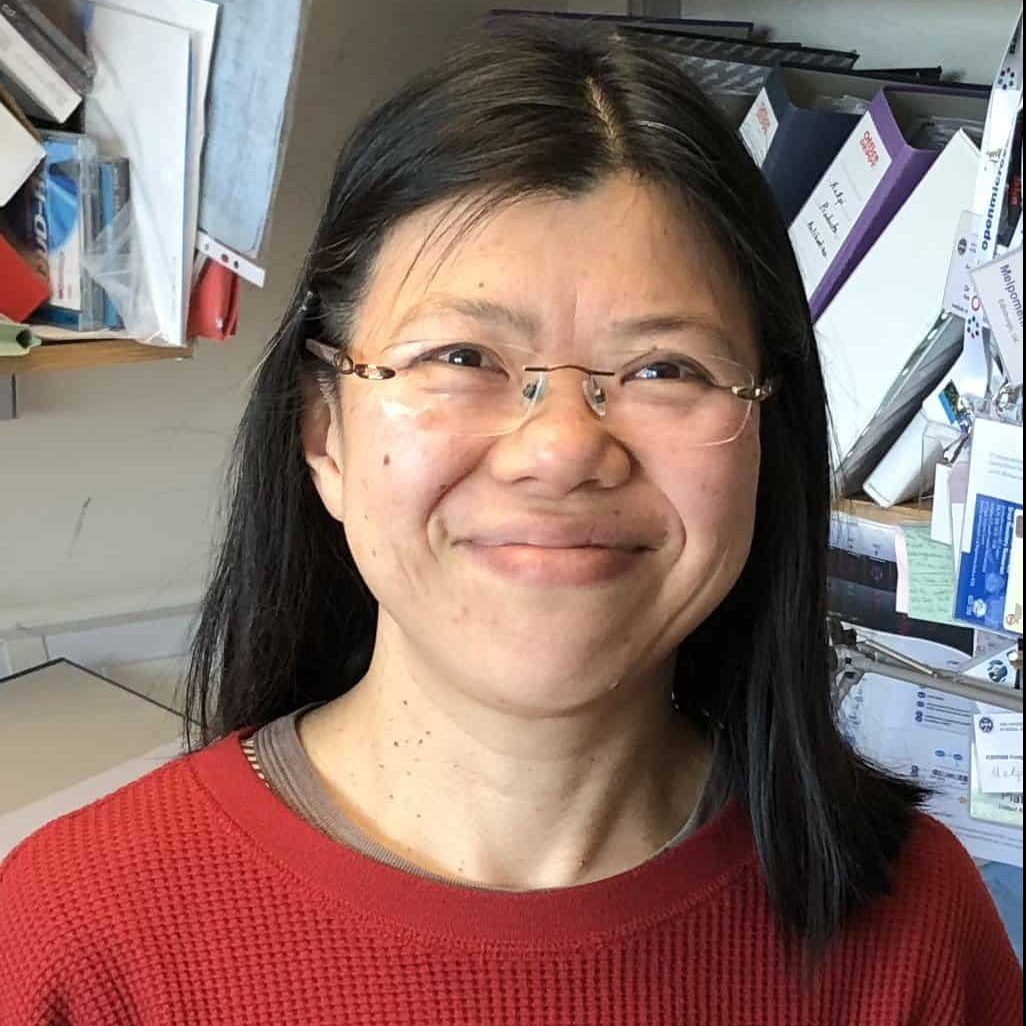 I studied Food Technology and Science at Kyoto University in Japan. After graduation, I worked within a food factory at Co-op Kobe for 7 years and was involved in the development of new confectionaries. I then came to Edinburgh with my husband. I have lived in Edinburgh for more than 25 years, but I am still discovering new parts of the city. I enjoy running, triathlon, water sports, and skiing.

During my postgraduate studies with Bill Earnshaw, I dissected the biochemical mechanism of nuclear apoptosis. Caspases, major apoptotic proteases, activate downstream factors during apoptosis. One of these downstream factors is Caspase-Activated DNase (CAD). We found that CAD could induce nuclear apoptosis in vitro and later in vivo. CAD knockout cell lines in chicken DT40 cells were my first encounter with genetic engineering techniques and I was fascinated by the power of them years before the CRISPR/Cas9 technology era.

After obtaining my Ph.D., I switched my focus to mitotic chromosome assembly and segregation. I developed a “promoter-hijack strategy” to establish conditional knockout cells for multiply-spliced essential genes including INCENP and KIF4A. In these cells, the addition of tetracycline or doxycycline stops the transcription from the target gene rather than from an exogenous cDNA, as was previously used for these conditional knockouts.

INCENP is a scaffold subunit regulating the localisation and activity of the Chromosome Passenger Complex (CPC). Aurora B kinase is the active subunit of the CPC and a key mitotic kinase. We introduced various mutants into INCENP conditional knockout cells to dissect its function. We showed that the single alpha helix domain within INCENP can directly bind to microtubules and regulate Aurora B kinase activity. In addition, through collaboration with Marcos Malumbres in Madrid, our promoter-hijack strategy was successfully applied to a mouse model and used to show that overexpression of Aurora B kinase can induce tumourigenesis in adult mice.

KIF4A, kinesin family member 4A, is a multifunctional microtubule-motor protein that plays an important role in cytokinesis. It is also a major protein of the mitotic chromosome scaffold: a fraction of insoluble chromosomal non-histone proteins that concentrate along the axis of sister chromatids. I combined KIF4A or SMC2 (a condensin subunit) conditional knockout cells with siRNA to deplete various combinations of chromosome scaffold proteins and showed that KIF4A, condensin, and topoisomerase IIα co-operatively shape mitotic chromosomes.

During the studies above, I was increasingly frustrated by the experimental limitations imposed by the vertebrate cell systems we could use at that time. In the case of conditional knockouts or RNA interference, we can only halt the expression of the gene of interest and the existing target proteins remain until they are eventually turned over. Therefore, the period of time required to deplete the target proteins entirely depends on the speed of their natural turnover, which can often be more than one cell cycle. We thought that this gradual decrease in levels of an essential protein could provide cells time to adapt by upregulating compensatory pathways, thereby leading to unclear phenotypes. Furthermore, it was not easy to examine the mechanism of mitotic chromosome assembly when we could only obtain pure populations of cells at the starting point (G2) and the end point (prometaphase chromosome). My favourite analogy to explain this situation is “cooking”. If you can only see a picture of the ingredients and the final dish, it is not easy to guess how the dish was cooked. However, if you had a snapshot of each step, you would be able to cook the dish properly! The ability to take these snapshots was what I wanted for my chromosome study.

Establishing our vertebrate cellular system was not straightforward. There were already powerful systems such as temperature sensitive CDC mutant cells available for yeasts, however, their chromosomes were too small to study the chromosome assembly process. In order to achieve a population of vertebrate cells synchronously entering mitosis, we utilised a chemical genetics approach with analogue sensitive (as) kinase technology, in which a bulky ATP analogue (e.g. 1NMPP1) inhibits a mutated target kinase in a rapid, reversible and highly specific manner. High activity of cyclin dependent kinase 1 (CDK1) is necessary for mitotic entry. Therefore, CDK1as cells accumulate at the G2/M boundary upon 1NMPP1 treatment. Release from the 1NMPP1 block allows the cells to enter mitosis readily. So far, we have established 5 different human CDK1as cell lines and chicken DT40 CDK1as cell lines. We found that the chicken DT40 cells were the best for the synchronous mitotic entry. DT40 cells enter mitosis within 5 minutes after release from 1NMPP1 treatment and we could reproducibly obtain G2, prophase, early or late prometaphase with >80 % purity. I also combined the CDK1as mutant with an Auxin Inducible Degron (AID) system, developed by Masato Kanemaki’s laboratory in Japan, for acute degradation of target proteins. We applied this combinatorial system to deplete target proteins just prior to mitotic entry so that the cells would not have time to adapt and would have successfully completed any essential interphase functions of the target proteins. Our hope was that this would make the phenotypic analysis straightforward.

Having the CDK1as/AID system allowed us to dissect the mitotic chromosome assembly process in minute-by-minute resolution with multiple techniques. We managed to present a model for a pathway of mitotic chromosome assembly which is beginning to resolve an over 130-year-old question. We extensively applied microscopy, proteomics, Hi-C and polymer modelling through an international interdisciplinary collaboration with the labs of Job Dekker (developer of the C technologies) and Leonid Mirny (a physicist). As a cell biologist, working with scientists from different fields was an exciting and challenging experience. We also proved that in mitosis condensin is necessary to remove interphase chromatin structures but dispensable for volume-wise compaction. I found that another advantage of the AID system was I could titrate the amount of auxin to produce a hypomorphic state. This allowed me to show that different levels of condensin are required to form and to segregate rod-shaped chromosomes.

Even after all these studies, we still have many questions to answer regarding mitotic chromosomes assembly which continue to fascinate me every day.

In addition to completing a standard triathlon, I would love to fully elucidate the mechanisms of mitotic chromosome assembly and disassembly in vertebrate cells. I would also like to figure out the centromeric chromatin structure. In order to do so, I am constantly working to improve our cellular systems and developing tools for genomic studies.